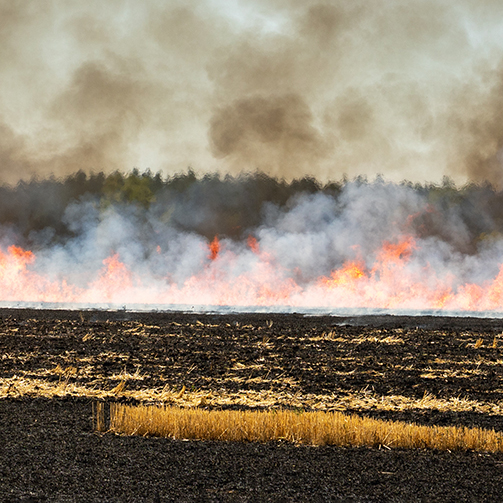 The first findings of the Bulgarian Humic Substances Society (BHSS), related to the harmful burning of plant residues, were made at the second conference of the society with International Participation hold in 2003. The results convinced the audience that straw is not a waste but a valuable product. it must be plowed (incorporated) into the soil that plant residues are a source of energy and nutrients. They support biodiversity management and create opportunities to improve soil fertility. The burning of plant residues leads to a decrease in soil organic matter in the humus horizon, and as is well known, the formation of humus takes hundreds of years.
A group of scientists, members of BHSS united and prepared a project with which they applied for funding in the Ministry of Environment and water (MoEW) to study the impact of the application of plant residues in the soil on the processes of humus formation. Unfortunately, funding was refused after repeated promises. In this regard, at the conference of Institute of Soil Science “N. Poushkarov” and Bulgarian Soil Science Society hold in 2005 was presented and printed in the Proceedings of the Conference of collective work on the topic of harmful practices of burning stubble “Plant residues – waste or treasure.”
Presentation of the material was made to visiting businessmen from Japan in our country, interested in the use of plant residues. These meetings at the Hilton Hotel, Sofia were attended by representatives of various Ministries and departments (MAF, MoEW, etc.).
Burning of plant residues leads to the following negative effects on the environment: deterioration of the physical properties of the soil and exposure of the soil surface, which makes it susceptible to erosion, causes health problems, mainly respiratory, reduces visibility and increases the risk of accidents, increases the risk from transboundary pollution and increases gas emissions.

The economic effect of the use of crop residues is the reduced application of fertilizers in agriculture and the most important soil protection as a resource of the future (Filcheva et al., 2005).

During the Third Conference of BHSS, in 2011, the issue of unreasonable human activity was raised again, which could lead to a sharp decrease in soil humus and cause a permanent and irreversible decline in soil fertility. In our country, the organic matter is ruthlessly destroyed by the criminal burning of stubble and by the fires caused in the forests. A broadcast on this issue was made on Nova TV with the participation of the President of the Society – Prof. Ekaterina Filcheva.

It is positive that this harmful burning of plant residue was reminded again in the interview of Prof. S. Rouseva, October 22, 2019 (“Bulgarian Farmer”), where all information published in the paper 2005, were presented.

The information published on July 28 by Zhechko Yordanov in Facebook that the Deputy Chairman of the Committee on Agriculture and Food in the National Assembly, on the advice of prominent soil scientists from the University of Ruse, proposes to introduce a requirement in Bulgaria to burn stubble every three years to restores organic carbon in our soils, caused a wave of comments from members of BHSS, expressing disagreement with the recommendation!
Let us promote the role of crop residues in agriculture, reminding them that they are a valuable product and not a waste to be destroyed.

On the societies website you will find publications of colleagues from various institutes of the Academy of Agriculture, dedicated to their research on plant residues and their application in agriculture.

What are the plant residues, experiments and possibilities for use will be presented on the site by Prof. Margarita Nankova, Dobrudzha Agricultural Institute, General Toshevo.